FURBEARER MANAGEMENT IN THE NORTHEAST
​CONSERVEWILDLIFE.ORG

​Responsible Use of Wildlife 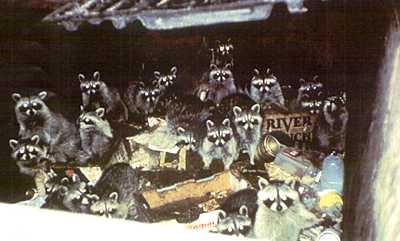 Adaptable and always ready to take advantage of any food sources, raccoons can reach extraordinarily high population levels in developed areas, increasing public health problems, property damage and predation on other wildlife species.
In addition to inherent ecological value, human societies have also recognized and accepted the use of wildlife resources for food, clothing, shelter, hunting, fishing, trapping, viewing, recreation, and as an indicator of environmental quality. Historically, people in Canada and the United States have looked to the land to secure food and provide for their household. Being independent, self-sufficient and hard-working, providing for one’s family, being a steward of the land – these values and lifestyles are traditionally and distinctly part of the fabric of North American culture, and remain so today. Direct and indirect uses of wildlife provide economic and emotional benefit to individuals and society. However, human use of natural resources, including wildlife, must be carried out in a responsible manner so that ecological processes can continue to function and sustain diverse wildlife populations and a healthy environment.

Humans can take responsibility for use of wildlife by regulating human activities that influence wildlife and habitats. Benefits to wildlife and humans can be maximized through the support and application of scientifically based management techniques developed in an ecological and social context that promotes sustained survival and welfare of wildlife populations. When people choose to be involved directly in responsible wildlife management, the overall value of wildlife is enhanced. This enhanced resource value increases:

​Although a range of individual philosophies exists within the realm of “animal rights”, most adherents to such philosophies hold similar foundational beliefs, including that (1) each individual animal should be afforded the same basic rights as humans, (2) every animal should live free from human-induced pain and suffering, (3) animals should not be exploited for any human purpose, and (4) every individual animal has equal status regardless of commonality or rarity, or whether or not the species is native, exotic, invasive or feral. The primary concern of animal rights advocates is the moral obligation of humans towards animals (i.e., having the same right to life as humans), rather than the well-being (i.e., welfare) of animals.

In contrast to the animal rights philosophical emphasis on individuals, the animal welfare philosophy focuses on quality of life for entire populations or species of animals. It does not preclude management of animal populations or the use of animals for food or other cultural uses, so long as the loss of life is justified, sustainable, and achieved through methods that do not cause undue pain and suffering. The primary concern of animal welfare advocates is the well-being of animals rather than man’s moral obligation.
​
Wildlife agencies and biologists, along with responsible fisherman, hunters and trappers, are staunch supporters of animal welfare.

Trap performance was verified by evaluating all components of a trapping system. To insure scientific credibility of results, trap research incorporated appropriate study designs and rigorous multi-stage testing such as:
Field testing was conducted on trap lines around the country where 1,000 experienced trappers accompanied by objective wildlife technicians operated traps and trapping systems under real world conditions. Everyone – managers, regulators, biologists, veterinarians and the trapping public – is interested in using the best technology available for the responsible capture of wildlife.

All types of traps used on land to hold live animals were evaluated against five performance criteria: animal welfare, efficiency, selectivity, practicality and safety. Trauma scales presented as guidelines in International Organization for Standardization (ISO) Document 10990-5 were used to determine a level of animal welfare performance. One scale allocates points to specific injuries (0-100), and the second scale groups specific injuries into classes (none-severe). While use of either scale would be acceptable to satisfy international agreements, the BMP process established by the Association of Fish and Wildlife Agencies uses a combination of both scales in its evaluation process. In order to meet BMP performance criteria, the primary species captured in a tested trap must have an average cumulative injury score of 55 points or less, and a minimum of 70% of captured animals must have no injuries or only have trauma described as mild or moderate. These scores are assessed by licensed veterinarians in blind necropsies of captured animals. The BMP process thus creates a higher performance standard by combining both ISO 10990-5 scales thereby increasing the welfare of captured animals.

Trap Selectivity
A trap is a mechanical device that, once properly set, will close only on objects heavy enough to set off the trigger. Trap and trapper are part of the same equation – one cannot function without the other. Regulated trappers and wildlife researchers invariably set traps in such a way that only the species (or sometimes a specific individual animal) they are targeting is likely to be captured. Numerous techniques trappers use to ensure their trap set capture their intended target include:
​The above elements make traps highly selective in terms of which animals they capture, and are used not only in fur harvest trapping but also in the live capture of animals for research and conservation programs, as well as for nuisance animal control and property damage situations.
​