​FURBEARER MANAGEMENT IN THE NORTHEAST
CONSERVEWILDLIFE.ORG

Our Commitment to Species and Habitat Conservation

Wildlife agencies expend significant time, money and effort monitoring wildlife populations, mapping critical habitats, and acquiring and managing land for habitat conservation. As biologists in the field of wildlife management, we deeply care about the welfare and long-term sustainability of wildlife populations – not only as a job, but as a passion. In what might seem to be a contradictory sentiment, we also believe that regulated utilization of the resource is not only ok, but ecologically sound and, in some cases, has great environmental benefits. It would be inappropriate to suggest that those people morally opposed to killing should abandon their personal convictions. However, the regulated utilization of a locally healthy, abundant wildlife population is not only acceptable, but can in some cases result in significant ecological benefits.

What is a Furbearer?

The term “furbearer” includes all mammals, all of which, by definition, possess some form of hair. Typically, however, wildlife managers use the term to identify mammal species that have traditionally been trapped or hunted primarily for their economic value.

North American furbearers are a diverse group, including both carnivores (meat eating predators such as bobcat, coyote, fisher and otter) and herbivores (gnawing rodents such as beaver and muskrat). All those that are trapped are common and abundant. Fur is only one of the many values ascribed to these species. Other values, both positive and negative, include:
Ecological Values: Cultural Values: Biological Values: Aesthetic Values: Economic Values:

Trapping’s role in conservation and management of furbearer populations can be viewed in terms of the following key points: 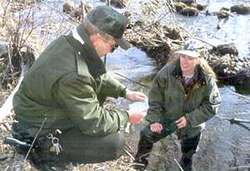 Within the United States, state fish and wildlife agencies have legal authority and pass laws governing wildlife resources. State environmental police officers and game wardens enforce trapping laws and regulations in every part of the country. There are various types of laws that apply to trapping within each northeastern state and province. Click here for links to northeastern wildlife agencies. Laws that regulate trapping by various means include:Professional wildlife biologists monitor populations of furbearing animals. Scientific studies are conducted to ensure these species are managed properly. In addition, research focused on the traps themselves identify which traps work best with each species, and which need improvements. New and improved traps are continually being developed. 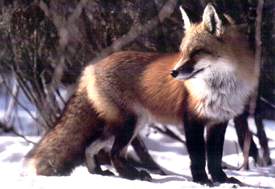 As long as trapping is regulated, there are no negative impacts on ecosystems. In fact, people who use wild animals for their food and clothing have less impact on ecosystems than those who depend on farm-raised beef and cotton.

Furbearers are Common and Abundant

Not all furbearer species are present or are harvested in every state and province. However, all furbearing species that are legally trapped in the Northeast are common and abundant throughout their respective ranges. None are federally threatened or endangered​.
​Choose an animal from the listing below to find out more about the animal, including scientific name and abundance map.

Protecting Public Safety and Private Property
To solve or prevent a wild animal problem, identify which animal may be causing your problem, or find a licensed wildlife control professional, click here.

Rabies is a common viral disease among wild animals in the United States, particularly in high populations of bats, foxes, raccoons and skunks. Raccoon strain rabies erupted in the mid-Atlantic states during the late 1970s, and rapidly expanded throughout the northeastern states by the mid-1990s. New Jersey had over 4,000 licensed trappers and harvested 40,000 raccoons in 1980. By the end of the decade, trapper numbers declined to only 768 trappers (-81%) as rumors and ultimate passage of legislation prohibiting the use of steel-jawed foothold traps became effective in October 1985. Raccoon harvests declined 73% and their population boomed. Reported cases of terrestrial rabies in New Jersey were rare prior to 1989, but have since averaged 212 cases annually.

The public’s tolerance and appreciation for wildlife is enhanced when wildlife damage is reduced using methods that are selective, effective, and take into consideration the welfare of the animal. Trapping is one of the most effective and economically available tools to help reduce damage caused by furbearers doing damage including coyotes and beaver.

The Massachusetts legislature banned all trap systems except live-capture cage traps in November 1996. In less than a year following the ban, trapping sales had declined and complaints regarding beaver increased 500%. With fewer trappers, beaver populations continued to increase dramatically. Consequently, public support for beaver and the critical wetlands they create has eroded to the point that beaver are now killed as “pests” with carcasses simply disposed of, where previously trappers would utilize the animal for food and clothing.

The private trapper (who traps for recreation, food and financial gain) conducts population reductions at no cost to the general public. The residents of the state derive a financial savings due to decreased property damage caused by furbearers, as well as a decreased need for paid wildlife control operators. Trapping does not pose a substantial risk to people, their property, pets, or to wildlife populations. On the contrary, it has been demonstrated that trapping plays a significant beneficial role. It is often difficult for people to understand this benefit of trapping until trapping is no longer conducted. Click here to learn about The Chelmsford Example.

Protecting North America’s Wetlands
Regulated trapping is an important defense for preservation of our wetland habitats. Find out how trapping is being used to control invasive nutria populations on the Chesapeake Bay and their damaging effects to the coastal wetlands along the Gulf Coast.

The Benefits of Regulated Trapping – The U.S. Fish and Wildlife Service
Click here to see how trapping aids in fulfilling the mission of the U.S. Fish and Wildlife Service and National Wildlife Refuge System.
​
Restoring / Reintroducing Wildlife
State agencies have been responsible for the recovery of many of our most iconic species including beaver, otter, wolf, bobcat, and marten that were on the brink of extinction at the turn of the 20th century due to habitat loss and unregulated harvest.

The foothold trap has played an integral role in the reintroduction, study, monitoring and conservation of the gray wolf. It has also been an indispensable tool in the success of red and gray wolf restoration efforts in the southeastern United States and Yellowstone.

Between 1976 and 2010, over 4,100 river otters have been live-trapped from areas where they were abundant and used for restoration and reintroduction efforts in 22 states, including the northeastern states of New York, Pennsylvania, Virginia and West Virginia. More than 2,400 otter were supplied by Louisiana trapper Lee Roy Sevin who used foothold traps to capture otters.

In all situations, it is vitally important that animals be maintained in a healthy condition throughout the capture procedure. The foothold trap continues to be the trap of choice for many research and reintroduction efforts. Both the traps and the trappers used in these efforts are often the same as those who recreationally harvest furbearers. Click here to learn more about reintroduction programs.

Protecting Endangered Species from Predators
As a result of human modifications to landscapes, raccoon populations are higher than in surrounding forested areas. Trapping helps to control numbers of raccoons and reduce predation on nests of migratory songbirds and waterfowl.

​There are many threats to the earth’s environment and the wildlife populations that depend on those environments. Challenges lie ahead for those of us concerned about the future of our wildlife. Increasing human populations result in continued loss and fragmentation of habitat from the permanent conversion of open space to roads and subdivisions. The introduction of exotic species such as purple loosestrife, mute swans, and zebra mussels all negatively affect native flora and fauna. Possible changes in our natural processes (climate change, etc.) might influence the stability of our ecosystems in ways we do not yet understand. We need to work together to sustain our natural resources. In Canada and the United States today, the harvesting of our wildlife is carefully monitored and controlled and is not a threat to the long-term sustainability of the species.