​FURBEARER MANAGEMENT IN THE NORTHEAST
CONSERVEWILDLIFE.ORG

TRAPPING THEN AND NOW

A woman works on an arctic fox pelt in the Northwest Territories of Canada.
The trapping of furbearers has been an enduring element of human culture ever since our prehistoric hunter-gatherer ancestors devised the first deadfalls, pit traps, snares and capture nets. Mankind has depended upon furbearers to provide the necessities for survival – meat for sustenance, and fur for clothing, bedding and shelter – throughout most of human history. Defining and defending territory where furbearers could be trapped to acquire these critical resources united families, clans and tribes long before the invention of agriculture and animal husbandry gave rise to ancient civilizations.​ 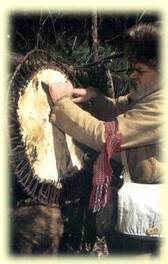 The trade in wild animal furs between Native Americans and the first European colonists was the single most important means of contact between these two widely dissimilar cultures. The fur trade was the economic life blood of the Dutch, English, French and Swedish colonists in North America during the 17th century, and was ultimately responsible for the exploration and settlement of Canada and the United States during the 18th and 19th centuries.

The fur trade began with territorial exploration via river systems and contact with Native Americans, who captured most of the animals valued by Europeans (including beaver, river otter, white-tailed deer, black bear and moose) and brought them to frontier trading posts or forts. Cities such as New York, Albany, Montreal, Quebec, St. Louis, Detroit, and Pittsburgh are just a few that owe their origins as fur trading posts. These interactions were important and valued by both colonists and Natives. Pelts were bartered for weapons, utensils, cloth and other desirable items.

Regional exploration and interaction for fur trading with the Native tribes that inhabited an area did not usually lead to hostilities. However, European diseases, the subsequent settlement patterns and other issues that followed often caused problems and let to armed clashes with Native peoples. Later still, antagonism among European nations attempting to monopolize the New World fur trade eventually led to armed fighting, which included their Native American allies.

The utilization of furbearer resources was unchallenged and unregulated until the early 20th century, when the first organized opposition to furbearer trapping emerged. The focus of that opposition was primarily on developing more humane traps and the curtailment of trapping abuses, rather than against trapper per se or the continued use of furbearer resources. Today, trapping is the only form of consumptive wildlife use that has an international standard by which tools and techniques are evaluated specifically for animal welfare.
​
While modern technology and agriculture have significantly reduced human dependence on furbearers for survival, people in both rural and developed areas continue to harvest furbearers for livelihood and personal fulfillment. The taking and trading of furbearer resources remain on the economic and environmental agendas of governments throughout the world. 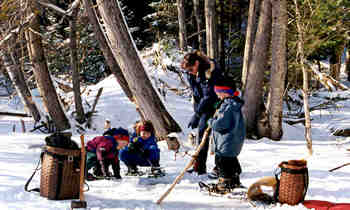 A family traps muskrats under the ice in New England.
Historically, people in Canada and the United States have looked to the land to secure food and provide for their households. Trapping is an annual seasonal activity in which many people in North America currently participate. Sociologists and other researchers have begun to document the importance of trapping in the lives of these people who still look to the land – including the utilization of wildlife – as part of their lifestyle. This lifestyle is often not understood by the larger segment of society whose members no longer hunt, trap, fish, raise their own vegetables, cut their own firewood or look to the land in other ways to provide for their households.

People who trap in the arctic and sub-arctic regions of the continent often fit our image of traditional trappers. Over 35,000 Alaskan and Canadian aboriginal people, motivated by the need to secure sustenance (food and clothing) for their families, participate in furbearer trapping annually. Fur trapping can be particularly important to them due to the remoteness of their communities, and may provide an essential source of income during certain times of the year. Many of their cultural values and traditions are passes along from generation to generation through the seasonal rituals of trapping. Trapping teaches their youngsters survival, independence, and subsistence skills and provides a meaningful fall and winter activity that helps instill a sense of responsibility to their families and communities.

The attitudes of trappers in the more developed areas of North America mirror the motives of their northern contemporaries. Approximately 270,000 families in Canada and the United States derive some income from trapping, but households that embrace a trapping lifestyle are often not apparent in suburban areas with a diverse mix of cultures. Researchers have documented and described a very vibrant trapping culture even within the urbanized northeastern United States. People who trap in this region list several motives for why they participate in trapping: lifestyle orientation, nature appreciation, wildlife management, affiliation with other people, self-sufficiency, and income (sometimes complimentary, sometimes critical, to the household budget). A universal theme expressed by many trappers is that trapping is a principal component of their lifestyle: it defines them and has deep meaning as an enduring, central life interest.

Trapping in today’s society has often been referred to as recreational in the context of a sport, yet as the sociological studies have revealed, the term is a misnomer. It fails to consider the motives of the hundreds of trappers surveyed. People who trap tend to express strong support for conservation programs and environmental protection. They may also cut firewood, raise their own vegetables, hunt and fish. For these people, the opportunity to harvest fish and wildlife contributes to a sense of self-reliance and independence. Studies in New England and elsewhere reveal that trappers barter furbearer pelts, products and trapping services (to remove nuisance wildlife causing property damage) in exchange for childcare, automobile repair, vegetables and other goods and services.
​
Whether they are aboriginal people living in Alaska and Canada, or people living in suburban or rural areas of New England, Louisiana, or industrialized southern Ontario, a common link among all trappers is that they value the capability of the land to produce wild animals and plants they can use to bring sustenance into their households (e.g., meat for food, pelts for clothing, and/or money to buy household goods). For many, trapping is an integral part of their life, a link to the land, a crucial element in their relationship to nature. With proper management of wildlife resources, people today can still choose to participate in this lifestyle as societies have done since the beginning of time. This is an opportunity and experience for people in Canada and the United States that can no longer be pursued throughout most of Europe or the rest of the industrialized world and provide a unique connection to the land.