FURBEARER MANAGEMENT IN THE NORTHEAST
​CONSERVEWILDLIFE.ORG 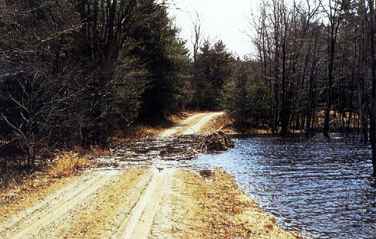 ​Chelmsford, Massachusetts is located about 20 miles northwest of the city of Boston and encompasses approximately 23 square miles. The first European settlement in the area was a fur trading post, established due to the abundance of beaver in the local wetlands. Today there are still approximately 870 acres of wetlands within the town, but it is now a densely settled suburban community with over 32,000 residents (1,357 per square mile). Local government is conducted through open town meetings and administered by five elected selectman.

During the late 1980s, a national animal rights group developed a "model" for getting trapping ban initiatives passed by town, county and state governments. The model guidelines encouraged animal rights activists to disguise regulated trapping as a public safety/animal welfare issue. Exactly in accordance with such direction, an article to ban trapping was introduced at a Chelmsford town meeting in 1988.

State wildlife experts reminded residents that regulated trapping was not a public safety issue, and warned that if regulated trapping were banned, there would be numerous undesirable consequences in the form of property damage and wildlife habitat degradation. Despite the warnings, the article was passed, and the trapping of furbearing mammals within the town was prohibited.

Prior to passage of the trapping ban, there were usually one to three complaints of beaver damage in the town each year. Following the ban, the beaver population, unchecked, began to grow rapidly, and the animals began to move into many previously unoccupied wetlands. Beaver dams began to flood houses and roadways. In 1992, state wildlife biologists working at the request of town officials investigated 25 beaver complaint sites. Two of these complaint sites were municipal wells which had been shut down (at a cost of $25,000) because of beaver flooding, and four other municipal wells were threatened. Individual landowners in town had incurred tens of thousands of dollars in damages to private wells, septic systems, lawns and roadways. The increasing beaver population and increasing property damage were directly related to the decision of the town's citizens to ban regulated trapping and allow uncontrolled beaver population growth to commence.

State wildlife officials offered the town several recommendations: (1) use water flow devices to reduce flooding in some areas, (2) get permits to breach beaver dams in other locations, and (3) rescind the trapping ban bylaw to allow beaver populations to be brought under control. The town took positive steps to implement these recommendations. The state issued permits to breach beaver dams that were disabling wells and septic systems. State wildlife personnel installed water flow devices (beaver pipes) at two sites and assisted town water department personnel with a third pipe. At a special town meeting in September 1992, town citizens voted by a two-to-one margin to allow regulated public trapping to resume. During the regular trapping season later that fall and winter, four fur harvesters working with homeowners and town officials removed 87 beaver. Today, with public, regulated trapping restored, Chelmsford again has only one to three beaver complaints per year. These are handled as they had been prior to 1988, under an effective and responsible program incorporating state wildlife officials and local fur harvesters.

In Massachusetts, the state wildlife agency has a well developed management plan for beaver. The goals of this plan are to manage beaver resources as assets, not liabilities; perpetuate beaver populations for future generations; keep the beaver population at levels compatible with suitable habitat; minimizing property damage caused by beaver; manage beaver for their positive wetland values, and allow people the sustainable use of public resources.

Chelmsford residents were confounded by animal rights activists who had promised in 1988 and again in 1992 to install water flow devices and proposed to "sterilize" beaver in the town (a technique that is not feasible on a free-roaming beaver population). Over the four years of the trapping ban, the activists never acted on their promises and were never held accountable for the statements they put forth. 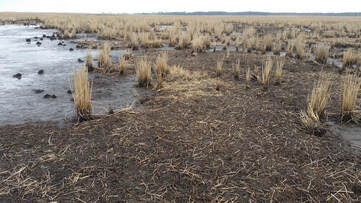 The Chesapeake Bay is an economic, cultural and natural treasure.  It is the largest estuary in the United States. The wetlands of the bay and its tributaries provide habitat for various birds and other wildlife.  Its marshes afford critical nursery environments for economically important fish and shellfish.

The Chesapeake Bay watershed is home to over 18 million people. It strengthens local economies through commercial fishing, tourism, recreational benefits, and real estate industries at an estimated $33 billion per year.

Nutria (Myocastor coypus) are a large, invasive, semi-aquatic rodent introduced to the Chesapeake Bay in the 1940’s. They are originally from South America and were imported for fur farming. Once the fur market collapsed, nutria were either intentionally released or escaped from farming facilities. With limited natural predators, populations quickly exploded and expanded within the region. 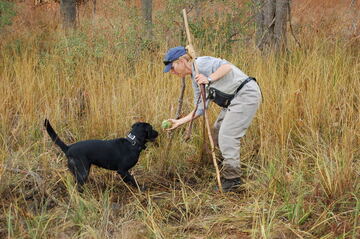 Since their release, nutria have destroyed thousands of acres of wetlands through their destructive habitats. Blackwater National Wildlife Refuge, located in Cambridge, MD, experienced losses of over 5000 acres of wetlands due primarily to nutria. In an economic study by Southwick Associates (employed by Maryland Department of Natural Resources) it was predicted nutria would cause losses of $35 million annually.

In 1993, the Maryland Department of Natural Resources (MD DNR) and the U.S. Fish and Wildlife Service (USFWS) established the first multi-agency task force to investigate potential approaches to combat nutria populations. In 1995, the MD DNR and USFWS, with assistance and direction from the U.S. Geological Survey (USGS), initiated a study that statistically addressed if nutria were the main cause of marsh loss and if the marsh would recover with their removal. The study provided scientific support that nutria were the primary cause of recent marsh loss, and determined that the damaged marshes would recover within one year if nutria were removed. 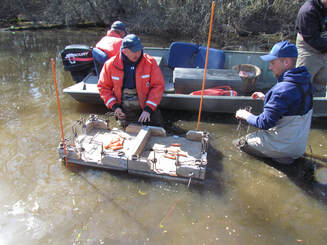 In April 2002, the eradication phase was fully implemented with the formation of the Chesapeake Bay Nutria Eradication Project (CBNEP). The USDA Animal and Plant Health Inspection Service (APHIS) - Wildlife Services, assumed primary responsibility for project implementation. Since inception, the CBNEP has removed almost 14,000 nutria, resulting in the protection of ¼ million acres of wetland habitats.  Federal, State and over 400 private land owners have been assisted by the effort and native wildlife populations have rebounded as a result.

Over the last 17 years, CBNEP developed new techniques for detecting and removing nutria and has assisted (technical support) programs throughout the United State and across the world.  In the later stages of eradication when nutria were in low densities, CBNEP created the nutria detector dog program. This program used government owned and trained canines to detect nutria scat (something that could easily be collected and stored for training) to help verify marshes were free of nutria.
​
The CBNEP expanded its eradication program far beyond the original efforts at Blackwater National Wildlife Refuge. The last confirm nutria was on May 7, 2015 and so the project is now in its final phase of confirming eradication of the entire Delmarva Peninsula. That requires staff revisit previously trapped watersheds multiple times over several years to detect and remove any nutria that were not previously found. The CBNEP has also contracted with Landcare Research (New Zealand) to analyze monitoring data in an effort to help provide statistical confidence to nutria eradication.

In 1903, President Theodore Roosevelt ordered that a small shell and mangrove-covered island in Florida’s Indian River be forever protected as a "preserve and breeding grounds for native birds." Paul Kroegel, a sometime boat builder, cook and orange grower, was hired to watch over this 3-acre sanctuary. His mission was clear: protect the island’s pelicans from poachers and plume hunters. With this simple promise of wildlife protection, the National Wildlife Refuge System was formed.

The System now encompasses more than 92 million acres in the United States managed by the U.S. Fish and Wildlife Service as wildlife refuges, wildlife ranges, wildlife management areas, waterfowl production areas and other designations for the protection and conservation of fish and wildlife, including those that are threatened with extinction. The mission of the National Wildlife Refuge System is:

"To preserve a national network of lands and waters for the conservation and management of fish, wildlife, and plant resources of the United States for the benefit of present and future generations." {E.O. 12996, March 1996}

Regulated trapping has been conducted as part of the sustainable use of wildlife resources, as well as an important part of refuge management programs for many years. A comprehensive evaluation of Refuge trapping programs conducted by the Service in 1997 documented the importance of this activity in helping Refuges meet the mission stated above. The study examined mammal trapping programs on the Refuge System that occurred between the years 1992 and 19961. The study identified 487 mammal trapping programs on 281 National Wildlife Refuges during the 5-year period. The Service report went on to say "This report demonstrates the importance of trapping as a professional wildlife management tool" and "Mammal trapping also provided important benefits for public health and safety and recreational, commercial, and subsistence opportunities for the public during the period."

Eleven reasons for trapping on Refuges were identified in the following order of abundance:A variety of trap types were used in these programs:The variety of trap types used reflects the diversity of environmental and weather conditions, as well as different wildlife species which are found from the Arctic National Wildlife Refuge in Alaska to wetland areas of Gulf Coast Refuges to the forest lands of Refuges in Maine. Trapping activities on Refuges are regulated, the public who participate are required to be licensed and follow many other rules as well to ensure these activities are conducted appropriately. Enforcement officers and biologists monitor activities to ensure trapping is done in accordance with existing laws.

Foothold traps are generally the only effective traps for catching canid species such as wolves, coyotes and foxes. As a result, they are almost always the trap of choice when any of these famously wary species are targeted for capture by either the public or wildlife researchers. An example is the ongoing, important role foothold traps are playing in the restoration of several endangered wolf populations. Red Wolves are captured, examined and relocated to reestablish new populations; Mexican Wolves are captured for a captive breeding program that will provide healthy animals for a reintroduction program; and stock-killing Gray Wolves are captured and relocated to reduce damage and maintain public support for their continuing restoration.

​Foothold traps are sometimes used to capture rare or endangered species unharmed so that the animals can be reintroduced into favorable habitats to reestablish healthy populations. However, foothold traps also play an important role in protecting the health and viability of many established or newly reestablished populations of rare and endangered species. Foothold traps are particularly important management tools for protecting rare and endangered species from undesirable levels of predation.
​
The following is a partial list of endangered or threatened plant, reptile, bird and mammal species in the U.S. which are being protected and managed through the use of foothold traps:
The target animals trapped during these operations to reduce habitat damage or predation on the rare species are either removed or relocated after capture. The trapping may be carried out by federal, state or provincial wildlife biologists and animal control agents or by private, regulated trappers.